About The Blue Collar Coach:

Kenny Chapman, The Blue Collar Coach and founder of The Blue Collar Success Group, entered the in-home service industry in 1994 when he bought a truck and plumbing company in western Colorado doing only $1,000 per month in revenue (yes, you read that correctly). Pager and “brick phone” in hand, Kenny scaled the company in only a few years to the point of creating personal income and freedom that was virtually unheard of in the industry. With his company systematized, he was able to take a six-month motorhome trip around the U.S. with his wife, “The Lovely Christy,” while the company thrived under his remote leadership.

Others wanted to know his secrets, which came down to cutting-edge strategies for impactful training, effective reporting, management accountability, and proper implementation. Kenny became an E-Myth Certified Coach, took what he learned from mentors and personal experience, and began sharing his message with others in the industry who were sick of their businesses running their lives. He was quickly recognized as a talented speaker and took his message to the “big stage,” touring with motivational legend Les Brown, honing his speaking and training skills and publishing his first book, The Six Dimensions of C.H.A.N.G.E. Kenny was named one of America’s Premier Experts in 2011 for his work helping entrepreneurs scale their companies and live better lives.

During his time speaking in other industries, while still owning his company in Colorado, Kenny realized his heart was in helping business owners, leaders, and techs specifically within the in-home service industry. He launched The Blue Collar Success Group to fill what he recognized as a gap in the industry, to offer expert technician training and assist owners and leaders in creating businesses that serve their lives. Shortly thereafter, Kenny was awarded The Tom McCart Consultant of the Year Award in 2014 for excellence in the HVAC industry. He was inspired to write his second book, In-Home Sales Acceleration, which reached #1 International Best-Seller status in four business categories. Kenny also writes a monthly column for Plumbing & Mechanical Magazine. He has been seen on ABC, NBC, CBS and FOX, as well as featured in USA Today.

To this day, Kenny records all the Instant Meeting Maker tech training videos himself (these are part of our Essential Club Membership) and develops other web-based resources. He also helps our exclusive Titanium Club members systematize, scale, and enjoy their lives more, does high-level one-on-one Strategic Growth Intensives with owners, and trains select live Blue Collar Academies.

How to Create Raving Fans, Increase Sales, and Improve Your Online Reputation in 30 Days or Less

**#1 Amazon best-seller, and best-selling book in four business categories in the US and Australia**

Kenny wrote this book specifically for in-home service professionals, based on proven techniques from his own experience running a multi-million-dollar plumbing/HVAC company, as well as knowledge gained as an award-winning industry consultant.

-How owners, managers, and selling technicians can provide The Ultimate Client Experience, while maximizing sales opportunities and gaining quality reviews.

-The 30-day In-Home Sales Acceleration Challenge, a daily tracking and accountability tool designed to help technicians and salespeople increase their sales and dramatically improve their results in 30 days or less.

-How to structure the call, ask the right questions, and overcome objections to increase conversion rates and average tickets.

-Methods for strategic value delivery that will help keep customers for life.

Whether you are purchasing this book for training ideas, or ordering multiples to give to your techs and salespeople, In-Home Sales Acceleration contains the tools you need to boost your sales and improve the quality of service you are providing to your clients.

Purchase Now
Get it Free With our Titanium Membership

A Simple Guide to Getting What You Want

Here’s a sample from the book’s foreword by best-selling author Tolly Burkan: “The Six Dimensions of CH.A.N.G.E. offers simple tools that will transform you. It contains many elements of a workbook; rather than merely providing you with good ideas, Kenny involves you in a self-development workshop designed to bring you exactly what you’ve been seeking…”

-How to stop settling for less than you desire and deserve.

-Identifying habits that are robbing you of potential income and happiness.

-Developing a practical game plan for achieving your goals.

-How to get “un-stuck” and move forward with massive momentum.

Purchase Now
Get it Free With our Titanium Membership

If you’re looking for the right tools and resources to take your home service company to the elusive “next level,” you’re in the right place. The Blue Collar Success Group’s Essential Club membership programs include everything you need to train your techs, increase your average ticket, and develop a marketing powerhouse for just $6.48 a day ($197/month). The Essential Club is full of unique online training tools to improve your team’s performance and boost your success. We utilize proven sales and marketing strategies to help you increase the number of customers you currently have, increase your average ticket amount, and increase the number of transactions per customer.

From high-level leadership to personal development to training your team members, The Blue Collar Success Group has developed a program to help you meet your personal and professional goals…without ever getting on a plane or leaving the comfort of your home or office.

The Blue Collar Success Group’s Titanium Club is a space for forward-thinking home services entrepreneurs and leaders to connect, be inspired, and discover the best ways to succeed. It’s so much more than a group of people who pay their monthly dues and attend a few meetings. Titanium members are growth-oriented, passionate about their lives and businesses, and enjoy sharing successes (and failures) with their peers. 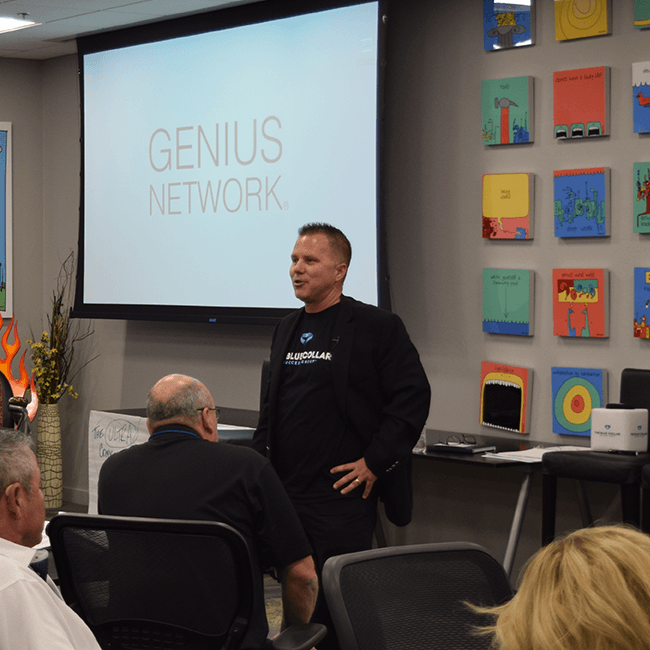